When starting this path almost 6 years ago, one major difference I found in myself verses all the other Pagans I was meeting was that I didn’t have a Goddess. Though I needed more in my life than what contemporary Christianity was offering me, I wasn’t ready to make the leap into full on Paganism. I certainly didn’t wish to turn my back on my faith in Christ and the Christian concept of who God is.

Let’s face it. The first reason why I was intrigued with Paganism was because of spellcraft. This shouldn’t be surprising since it is what intrigues many followers. For me it is kind of how people go to Christianity for a pass to Heaven. Another way I guess that they are so much alike. But I digress. You see it wasn’t the deities that originally intrigued me, it was the possibilities that spell spellcrafting opened for me.

As I studied Paganism more and more I discovered how much the Goddess was an important part of their faith. I started to become intrigued with was the Goddess would be in my practice. Being an avid genealogist when I started the Christo-Pagan portion of my path, and the fact that the spellcasting I was primarily involved with was spirit communication, that seemed like a logical substitute. For almost 6 years it has worked for me too. My vision of the Christian God (God the Father) was as the concept of the All (the great spirit from which all things come from), then on my altar were my ancestors in place of the Goddess and Christ in the place of God.

To me it worked perfectly fine. I was able to do everything that I wanted to do and I wasn’t mixing deities in with Christ that I didn’t feel comfortable with.

Almost two years after I started my Christo-Pagan path, Pan came into my practice. This happened while meditating on my homosexuality and what it meant to me. Even with Pan I made it clear that he was more of a guest appearance than a main role in my practice, but still no Goddess. So at almost 6 years of practice I figured I would probably never experience what other Pagans do when they talk of their being in communion with the Goddess, and I was okay with that.

But then slowly around the 5.5-5.75 year mark something started to gnaw at the back of my mind. Was I actually meant to have a Goddess in my practice? After Pan, and establishing that whoever it was would have to stand equal to Christ, I was certain whoever the Goddess would be would need to fit within my concept of Christo-Paganism. This limited my option to only a few females and most seemed to be named Mary. So I looked at the Christo-Pagans who I knew from books or blogs and I kept seeing the virgin Mary or Mary Magdalen. While both are viable options, however neither of these two as I understood them at the time fulfilled who I would consider the Goddess.

Then I stumbled on a website that talked about Sophia and of her story. Though the feeling and concept is still so new to me, I feel a sense of catching up with an old friend, rather that being introduced for the first time.

So what does this all mean for you? When it comes to Christo-Paganism, if you don’t feel called to a certain Goddess, it doesn’t mean you’re not a Christo-Pagan. You don’t have to have a certain Goddess or any Goddess if you aren’t comfortable. And if you’re one who wants a Goddess and none have come to you, in the words of a dear friend, “give it time,” and then the right one will find you. 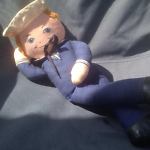